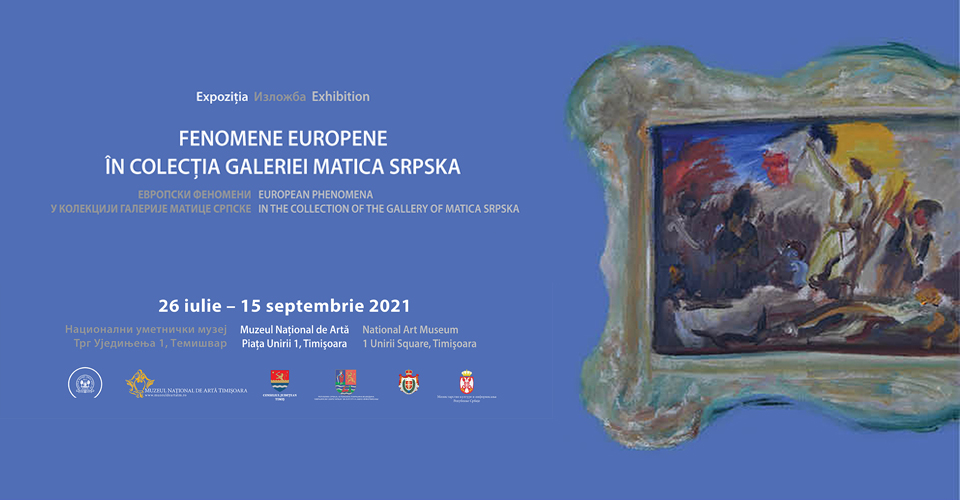 European Phenomena in the collection of the Gallery of Matica srpska

The Gallery of Matica srpska from Novi Sad and National Museum of Art from Timișoara signed a Protocol on Cooperation with the intention of connecting two future European Capitals of Culture – Novi Sad and Timișoara – through the implementation of joint projects and exhibitions, which will carry this prestigious title in 2022 and 2023.

On the occasion of the beginning of cooperation, on Monday, July 26, 2021, at 6 pm, the exhibition European Phenomena in the collection of the Gallery of Matica srpska will be officially opened at the National Art Museum in Timișoara. The opening speeches will be held by dr Filip Adrian Petcu, Manager of the National Art Museum Timișoara, dr Tijana Palkovljević Bugarski, director of the Gallery of Matica srpska, Alin Adrian Nica, President of Timiş County Council, representatives of the Prefecture and Town Hall of Timisoara, while the exhibition will be officially opened by Bogdan Gheorghiu, Minister of Culture of Romania and Maja Gojković, vice president of the Government of Serbia and Minister of Culture and Media of the Republic of Serbia. The opening of the exhibition will be preceded by the performance Crnjanski about Timișoara, produced by the Serbian stage at the Theater for Children and Youth “Merlin” from Timișoara.

On the occasion of celebrating the Year of European Cultural Heritage on the national level, the exhibition European Phenomena in the Collection of The Gallery of Matica srpska represents artworks of Serbian as well as foreign artists from different epochs, painted in different techniques and collected with the intention of making the viewer think about the phenomena and values, on which the European civilization was built. Subsequently, there are four different themes that emerged and that are highlighted in the exhibition: Freedom, Progress, Heritage and Diversity.

Heritage is the basis of European culture, recounted through myths and religions, and it is a wide field in which the richness of local diversities, customs and traditions speak about human shortcomings and strengths, translated into well-known stories and images. Freedom surfaced as the second theme. Freedom as the ideal of nations and individuals and equally of artists, scientists and philosophers, as something to be gained, defended and advanced. Progress came next, as a constant aspiration of the European nations towards growth and improvement in order to remain competitive and prosperous; an aspiration that is based on education, science, inventiveness and creativity, which will provide progress for the whole continent. And finally, we chose Diversity, as the basic virtue of Europe, in which different nations, languages, religions and commitments are united with the objective of creating a more tolerant and rational society.

The exhibition offers more than one interpretation and understanding of European values and phenomena through the displayed artworks with the main idea of making the viewer think about them.

The exhibition is followed by the Romanian-English publication European Phenomena in the Collection of The Gallery of Matica srpska with texts of the director of GMS dr Tijana Palkovljević Bugarski, as well as curators and conservators Danilo Vuksanović, Miroslava Žarkov, Luka Kulić i Stanislava Jovanović.

The realization of the exhibition and the catalog were supported by the Ministry of Culture and Media of the Republic of Serbia, Secretariat for Culture, Public Information and Relations with Religious Communities of Autonomous Province of Vojvodina and Timiş County Council.